In the early 1970s the Association for the Mentally Retarded was entering a period of major growth and dealing with many changes. It was decided that there was a need for a full time Executive Director. Chris Turnmire was invited by President Jordan Johnston to take on the position. The invitation came as a surprise to Chris as he was currently employed with the Alberta government, working as a Community Resource Development worker in a program called Services for the Handicapped.

The relationship between government and Associations are not always the best. There is always the issue of funding and that never goes away. Alberta was probably the first province to recognize programs above and beyond ordinary social allowance programs for people with developmental disabilities.

Chris started in 1974 as the first executive director of the Grande Prairie Association. He concentrated on trying to encourage the Association of the day to expand services available to the clients.

Like most early parent organizations, they developed services for the existing sons and daughters of the day. When I first started, Swan Industries had a capacity of fifteen. The board indicated that the services were for those fifteen individuals and nobody was going out to work. The following year there were four or five people placed in the community in employment situations. In the next couple years, that number rose to fifty.

In the 1970s, the Association was a very strong parent driven organization. Parent organizations struggled with the concept of their sons and daughters moving out of larger residential services into smaller living situations. It was a real shift for the parents on the board to understand why that was done. The moves were a result of the sharing of information with other Associations, provincially and nationally, the prevailing influence coming from the work of Wolfensberger, whose ideas embraced the notion of community resources versus institutional or “segregated” resources.

Parents are the main driving force. My own personal view is that we had very strong, active parent organizations. If you look at organizations starting up in the 50s and carrying through to the 60s, very strong and primarily driven by parents wanting resources. When more and more community organizations developed, there was less need for parents to stay involved. If there’s a residential program, a day program, something happening recreationally, there is not that same need for parents to be vigilant. Some of that dropped off and maybe that needs to be more front and center again, to ensure that levels of support don’t diminish.

As Executive Director, Chris was involved with the transfer of educational services to the Grande Prairie Public school system assumed responsibility for the students from the Peace School of Hope teachers and the school program and incorporated that into Montrose Junior High. 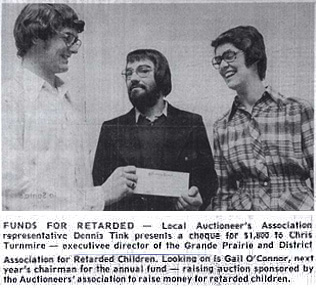 The community’s reaction to the group homes was divided in the 1970s. Residences were built at 109th Ave, 96A St. and 114th Ave. during Chris’s time as Executive Director. There was a petition at one point against having group homes in the community. Chris believes the petition was a result of a lack of information, so meetings were arranged with the parent groups and neighbourhood residents in order to dispel their fears.

Clients who remained with their families were more naturally included and integrated into the community than those who lived in residential services. Due to staffing issues, the group home residents were more accustomed to group settings.

The community of Grande Prairie has always been strongly supportive. The visibility of the disabled in the community helped to make the public more comfortable with their inclusion. Regular newspaper articles kept the issues to the forefront as well. The Association was a fairly large employer, with fifty or sixty staff plus additional part time staff earning a paycheck and spending in the community.

In the present day, just about everywhere you go, you see individuals in the community working, recreating, socializing and taking part. That’s part of the current inclusion philosophy at work. And I think it’s been a natural progression.

“There was always an expectation from government that we would raise a certain amount of funding.” The Flowers of Hope campaign was a national program and was one of the largest fundraisers.

The Association made a conscious decision to discontinue the Flowers of Hope campaign in an effort to move away from the image of charity/pity. The focus was more on the abilities rather than the disabilities of individuals.

Chris maintains that being involved with the organization was a humbling experience.

At the end of the day, you could go home and feel as though you were doing something worthwhile. There was an ability to attract good people to staff the organization. They understood what the board was trying to achieve.

There is always a challenge to get staff to “buy in” to what you are trying to do. It gets more difficult as the organization gets larger. There is always a turnover, especially in residential services, because of the shift work involved. There was a constant graduation of people from the residences to the day programs. That was just the nature of the work. The Association board took the attitude that “ we didn’t lose a person, we still retained them.

I think the struggle has been to recognize the value of work that the staff do. In some sectors they still believe that that this work is carried out by volunteers. It’s hard to change that perception in terms of compensation that respects the value in the work that is done.

Working with the disabled has stresses that are different from everyday work. The expectations and safety aspects are more stringent. A lot is expected of the staff.

Younger families need to find out what services are available and if they are not completely satisfied, they need to start working early to try to develop what they believe should be the resources in place.