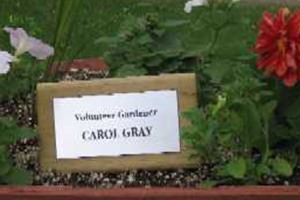 There is a plaque in the pioneer village at the Grande Prairie Museum with Carol Gray's name on it. The inscription, "Carol Gray...Volunteer Gardener," acknowledges Carol's contributions to the village over her many years of volunteering there, but gardening is not the only work Carol contributes.

She is an active volunteer at the South Peace Regional Archives and works diligently to keep databases up to date. Veteran staff at the museum are clearly fond of Carol, including her in coffee time banter. Carol holds her own and gives as good as she gets when it comes to teasing. She takes care to write her messages down to make sure she is understood but communicates remarkably well when using only facial expressions and occasional animated gestures.

Carol has a keen sense of humour that runs in her family and has taken her a long way in dealing with the challenges she has had to face. Her brother-in -law, Dan Johnson, says he has known Carol since she was a baby. He remembers that as a young girl, Carol was always busy doing chores with her father and sister on the family farm. He describes Carol as “a real live wire...no sitting down for that one.”

In 1977 Carol was involved in a motor vehicle accident. She was seventeen years old. She made a remarkable recovery following a period of coma for many months. Carol spent one year in the hospital after her accident and doctors said she would never walk again. Carol would not take “no” for an answer, which was no surprise to her family. That stubborn streak is another family trait.

Carol applied herself to the task of relearning basic skills. She uses a rail to practice walking and in the initial stages of her recovery, worked at it up to five hours a day. Carol also practices at the QEII hospital where she regularly walks along the hallways, using the built-in rails for support.

Carol likes to be involved in the community. Her busy workweek is divided between several jobs and the full schedule is just what she likes. She can be found working at the Grande Prairie Museum, Zellers, a day care centre and New Generations, the Association's used clothing store. Dan jokes that the various jobs “keep her out of trouble.”

With her positive attitude and determination, Carol has demonstrated a remarkable ability to thrive despite dealing with many dramatic life challenges.