Elsie Lawrance faced her challenges head on. Her fighting spirit saw her through many difficulties in life. As a war bride, parent, advocate, teacher and poet, she was never one to shy away from adversity.

As a young woman, Elsie was not only a war bride, but was also actively involved in the war effort. She spent time with a ground unit, firing anti-aircraft guns at the Germans in World War II. The story goes that she actually gunned one plane down during her time on duty.

Elsie’s daughter, Peggy Lawrance, was born in the late 1950s, in a time when the general public was not so aware of issues and realities facing the families of the handicapped or as accepting of them into the community. Her mother Elsie was concerned because she was having some difficulty in feeding Peggy. She arranged for Peggy to be examined by a physician and was shocked when he told her that her daughter was “Mongoloid.” Elsie was advised that Peggy should be institutionalized.

Elsie was not influenced by the doctor’s advice or daunted by public opinion and decided that Peggy would stay at home with her family. Peggy traveled everywhere with family and had as normal an upbringing as they could provide. Elsie did notice that Peggy tended to regress with each new baby in the family.

Elsie’s experience was that the community was very welcoming to Peggy, as she was always included in the family’s activities. Elsie could count on the fact that friends in the Lawrance’s neighbourhood looked out for her. Peggy could disappear so quickly, they had to keep a constant watch. Elsie never met anyone who didn’t like Peggy.

As a young girl Peggy developed what Elsie referred to as “funniosities” or certain bad habits that, despite daily correction, returned as part of Peggy’s normal routine. Elsie consistently tried to make Peggy’s life as normal as possible so that she would have exposure to proper behaviour and an opportunity for socialization.

Peggy attended the Peace School of Hope until she was 16 years old. She used to mop the long corridor of the school, dividing it into territories as she worked. When she completed school, Peggy started a job at the Swan Industries workshop.

As a teenager Peggy experienced a tremendous growth period and became quite large and heavy, a trait that Elsie describes as a characteristic of Peggy’s disability. It became more and more difficult to find clothing for Peggy as she matured.

Throughout the years, Elsie remained active in the Association and attended many meetings. She noted a recurring theme in some families, who thought their own children were capable of much more than what was required of them by the schools.

Elsie’s greatest fear was what would happen to Peggy when she passed away. “Peggy taught me so much patience, she always makes me want to cry and laugh.”

Elsie encouraged families to get in touch with a professional Association for help. Her message to families with disabled children was to contact older families as well because their support will “help them to overcome the shock.” 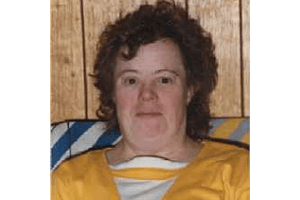 Margaret Eva was known to all as Peggy or “Miss Mag”. She died three years ago and although we miss her very much she’s always with us and I am happy to think that she’s safe with Jesus.

I remember it was shortly after Peggy’s sixth birthday, September 17th, 1954 that Vi Campbell came to call. She was visiting parents of mentally handicapped children, to get our thoughts on starting a school to teach simple skills, such as personal hygiene, recognition of numbers and letters, listening to children’s stories etc. The Masonic Lodge had offered the use of a basement room in their building, complete with a table and chairs and there were people ready and willing to pick up the children at 10 a.m. and return them home at 3 p.m. The children would take lunch to school. Mr. & Mrs. Bert Tieman were of tremendous help with teaching. There were others helping whose names I can’t recall.

The Association for the Mentally Handicapped became a reality with monthly meetings and these attracted not only local parents but also people from outlying areas and as time passed we acquired a bus. “The Peace School of Hope” was built and Barrydale dormitory for out of towners, named for Dale McQuaig and Barry Ferguson.

One of our annual fundraisers was the strawberry tea, which was always well attended. It was a lot of work, as members supplied sandwiches and cakes, card tables and dainty cloths, cups, saucers, tea spoons, cream & sugar sets, dishes for the berries (& ice cream), in short everything but the kitchen sink.

Our other fundraiser was the “Flowers of Hope” campaign, very ably and efficiently organized by Mrs. Betty Eskdale who came to the Association in 1966.

The school hall was used for dancing and the Christmas concert, and music for any such occasion was supplied by Doreen Miller and her band. Doreen also arranged for clients to attend barbeques at her home. A long and faithful service given freely and with love. Let’s now have a big hand for Betty and Doreen. There are so many achievements I should mention, but time will not permit, so in closing, let me just say that I’m truly amazed thinking of the great things that have been accomplished since what I think of as “the planting of the seed.” In my mind the most important aspect has been opening the eyes of the general public to the tremendous potential of our young people and to know how worthy they are of acceptance and respect. God Bless them all.

If there are names or important events I’ve missed, please bear in mind that I’ve reached a time in my life when I can’t remember what I had for lunch yesterday. It must be a part of aging, as many of my friends suffer from the same memory lapses, so please bear with me.

Peggy died during the night of June 27th 1996 in the hospital. Before the removal to Oliver’s funeral home we all cried our eyes out, and that’s the last time I had a good cry. God has her in safe keeping with her dad and one brother. I have a lovely picture of her in my living room and when I have a problem of feeling blue I talk to her. I’m not “losing it”, I’m paying Peggy a tribute. God Bless her now and for all time.

A Visit with Mrs. Elsie Lawrance

I first went to see Mrs. Lawrance with Mrs. Betty Eskdale. She was living in MacKenzie Place, which is a part of the hospital. It is a residence for individuals who need medical help. Mrs. Lawrance was only able to lay in her bed. Mrs. Eskdale introduced me and we talked about the Association and her daughter Peggy. Elsie’s eyes were sharp but it was very apparent that she was in pain. On a subsequent visit she told me that she could just cry as the pain was very tortuous. When we would talk, once in a while the pain would shoot up her legs. When we would talk about Peggy she would mention how Peggy would love to use her fork and stab at her peas. She liked to see them fly across the room.

As a mother of a little girl with Downe’s syndrome we didn’t have to talk much but look into each other’s eyes with acknowledgement of understanding. She would tell me how she raised boys and that how she would try to teach Peggy to make sure she put her menstrual pad in the garbage. Oh how I think it bothered her if her sons happened to see it.

The pictures in her room show her three daughters; one who lives in Grande Prairie, another who lives in Calgary and Peggy. There is also a picture of her son.

Elsie was a war bride from England. She was certainly very much in love with her husband. I showed her the wedding picture I saw that was beside her bed. She ran her fingers across the picture as if it was gold. I am sure some memories came forward as she recognized her parents and then they were gone. I couldn’t help but notice how flush she got when she talked about meeting her husband in England.

I asked her what she would like to eat and she said that she would like some fish and chips so my daughter and I bought some from Joey’s Only and brought some for her. I am pretty sure that made her day. I had surgery not that long ago and the worst part about my stay was the food. It was awful. I put the fish and chips in a bowl and gave her a fork. She gave up on the fork after a while and used her fingers. When the nurse came in with her supper I realized that they would feed her. I am glad I gave her the dignity of being able to choose to use her fork or her fingers.

The week I visited was really wet and rainy. Elsie could see out the window and told me how she loved the rain. Here I am complaining about the rain and here she is bed ridden and telling me about how much she loved the rain. She was a woman of spirit. When we talked her voice was soft and quiet. She was very much at peace and took the pain in quiet resolution. 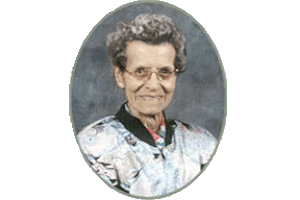 Elsie’s poetry was included in her Memorial Card:

At times, to my shame, I have wondered “Is there a God?” You know, things go wrong, or you’re worried, and one is such a worthless speck in all of creation; but then you visit the countryside – you climb a hill, and feel the fresh, sweet air, borne how many countless miles. Birds sing – to them a thoughtless effort, but to the listener, sheer magic! That each small winged creature should possess in it’s being, this gift of joyous music. And so you wonder – and from wondering you know – yes – there is a God and He has given to us so many things who’s worth cannot be measured, And you feel at one and the same time humbled, exalted, joyful and at peace.