James Fazikas was known as a “character” when he was young and he remained one until the end of his life. James’ mother Rose Fazikas says that James lived at home with the family for thirty nine years, until he became restless and his family decided to reach out for help. James moved on to Fairview College, and then to Grande Prairie where he made a life for himself by taking on a variety of jobs, including a short time at the Association bottle depot. James used to bicycle to work, even in the heavy traffic.

Rose remembers that when she was raising James, before the larger community of Manning was developed, there was little in the way of support for a parent with a disabled child. There was one doctor and a pharmacist available and she often relied heavily on the health nurse for the help and information she needed. She didn’t discover for a long time that James was hearing impaired. “His eyes would ask questions, but he couldn’t hear the answers.”

James grew up on a farm and still loves to wear coveralls. His dad taught him to drive a tractor. Early one morning, Rose heard the tractor going in the yard. She looked out to find James heading out toward the neighbor’s farm. She found out later that he wanted to help his neighbor with the cultivating.

There’s a story about James driving the family car to a nearby farm and then back again, apparently having transferred his tractor driving skills to the car. Rose says she nearly “went to pieces” but didn’t get angry, just put her arms around James and told him, “Honey, that’s dangerous.” When James was younger, he used to ride long distances on his bike, with a radio attached to the handlebars, listening to CJXX.

Peter Sluik, group home Supervisor during the year and a half James lived there. James loved to cook and often prepared meals in the group home. Peter knows that sometimes James was frustrated because he remembered his independence and still preferred to live on his own, but medical circumstances prevented him. He would sometimes threaten to fire the staff and hire “some pretty young girls” to take care of him. When James was not responsive to help from staff, Peter says they often tried to find ways to help in an inconspicuous way. 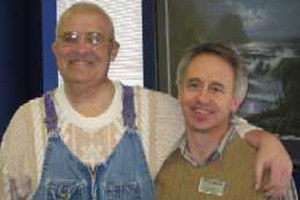 Aberdeen Centre pharmacist Curtis Crough has known James for twenty years. James used to work there, helping out with odd jobs. For Curtis’ birthday, James invited him to his apartment and cooked him a lunch of bacon and eggs. James used to visit daily at the Patterson Village Mall pharmacy with his aide. Curtis first met James there and describes him as a “rounder” who would do the tour and visit everyone at the pharmacy. James came to the pharmacy four times a week for fifteen years. Curtis asked if he would like something to do when came to visit, so James ended up helping with recycling, making coffee, sweeping and making deliveries. James “retired” from his pharmacy job in the later years, but still visited often, right up until the week before he passed away. Curtis says James has been an influence in attracting similar business to the pharmacy and regular customers look for James when they come in, asking where he is if they don’t see him around.

James fought for his independence and lived on his own, with the support of a part-time aide, for most of his adult life.