Zelda Fraser’s attitude earned her the nickname of “Sunshine” at the Peace School of Hope and to this day her sisters, Dorothy Rycroft and Blanche Pack, agree that it is a fitting description. Zelda says she remembers the Peace School and enjoyed her classes in reading and writing. 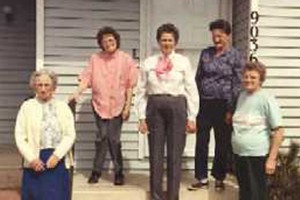 Zelda is the youngest of six girls and two boys born to the Frasers in Sexsmith, AB. She was born prematurely, weighing only 3 lbs, 4 oz. Her parents kept her on the oven door for a few days and fed her with an eyedropper because she was so tiny. In such a large family, there were always brothers and sisters around to help Zelda and pick her up if she wanted. “We all kind of babied her and yet she was never spoiled.”

Blanche Pack is the second youngest in the family and says she “never really was away from Zelda. We were close in age and spent a lot of time together.” Blanche is very matter-of-fact about dealing with her sister’s disability. “I’ve grown up with it. There were some that wondered how I did it. I guess I was just plum used to her.” 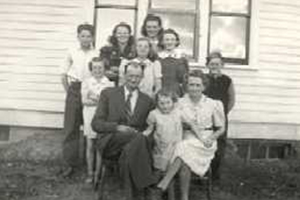 Zelda doesn’t complain. The family has always felt fortunate in that way. Her sisters say that Zelda’s best memories are from her time at the farm in Tee Pee Creek. The Frasers had a dog on the farm and he was really faithful to Zelda. She would hang on to his coat and he would help her to stand up. “Her strength was always in her arms.” Zelda’s mother bought a tricycle for her so that Zelda could strengthen her legs. She rode it in the basement of the house, causing a commotion one time by riding straight into a shelf of fruit jars and breaking them all over the basement floor.

Zelda was three years old before she learned to walk. She was always included in family activities, partly because babysitters were difficult to find but also because they enjoyed her company. Dorothy Rycroft, the oldest of the Frasers, and Blanche loved going to dances with Zelda and enjoyed her musical talents. “You can just feel it, that music in her.” Teepee Creek was a very accepting community as Zelda was growing up. In church Zelda sang the hymns with everyone and “you could hear her just about leading.”

Dorothy and Blanche played baseball in the summers. Zelda mostly watched the older kids, but sometimes she would play. When it was her turn to bat, one of the others would run the bases for her.

Zelda has lived at 90th Ave group home for more than ten years. Association life has kept her busy all her adult life. For years Zelda worked at the New Generations clothing store, making flowers and washing toys. She says she enjoyed the work but recently the time had come for her to retire. Zelda was also a regular rider at the Peace Area Riding for the Disabled Society (PARDS), where her favourite horse was named Raymond. She says she had a few falls but that didn’t stop her from enjoying the horses. In her room in the group home Zelda has a special shelf built to hold her bowling trophy, won at a Special Olympics meet in Edmonton.

Zelda’s sisters say she has a great memory and always has. She loves to ride in the truck with Blanche, who puts the old time country music on. Zelda loves to sing along and is good at it.

One of Zelda’s favourite things to do is to hold a new baby. Blanche has often seen fussy babies settle down when Zelda holds them. “Zelda has always had strong arms and people could always trust her not to drop the babies.” Marilyn Rycroft, a longtime Association employee, is also from Teepee Creek and remembers Zelda holding her firstborn son. Blanche is happy that Zelda is able to hold and get to know her young nieces and nephews.

I said, you know, I said it just hit me. Zelda’s now holding babies in the third generation. I said sure is a good thing somebody supplies her.